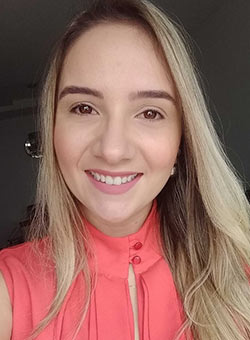 Islanny Brasileiro
Department of Chemical Engineering, University of Rio Grande do Norte, Natal, Rio Grande do Norte, Brazil
Guest Editors
Introduction
Environmental pollution resulting from the discharge of effluents containing organic compounds into rivers and lakes is of great concern, because of its ability to endanger human and animal health. For this reason, several technologies that are capable of degrading these contaminants, rather than just converting them from one form to another, have been studied. In this regard, it is possible to highlight the Advanced Oxidative Processes (AOPs), in particular heterogeneous photocatalysis and the heterogeneous photo-Fenton process, which generally mineralize the pollutants completely, converting them to CO2 and H2O from the generation of highly oxidizing hydroxyl radicals (?OH). However, many catalysts used in theses process, like TiO2 for example, are not activated by sunlight since they just absorb energy in UV range. Besides that, some semiconductors that can be photoactivated by the sunlight do not exhibit excellent photocatalytic activity due to the low mobility of the charge carrier or the rapid recombination of photoexcited pairs, as Fe2O3 and CuO. Therefore, developing new catalysts with high efficiency for the degradation of organic compounds in effluents, mediated by sunlight and that are stable to be reused successively, has been a great challenge. In this way, the works presented will provide a scientific, technological and social contribution to the community so that a precious and scarce resource such as water can be preserved without compromising human health.
Aims and Scope:
Guidelines for Submission
Manuscripts should be formatted according to the guidelines for authors
(see: http://www.sciencepublishinggroup.org/journal/guideforauthors?journalid=129).